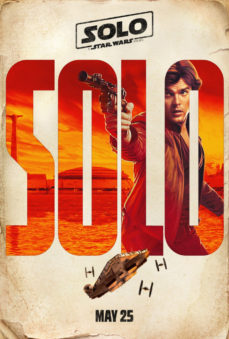 There seems to be a lot of wishful schadenfreude around Solo: A Star Wars Story. Many Star Wars fans seem to want all the standalone films to fail spectacularly, and this one more than others because of all the controversy during filming. I’m sorry to have to disappoint you, but the film is a fun romp, and perhaps the closest in spirit to the original trilogy.

We meet Han (Alden Ehrenreich) on the shipbuilding world of Corellia where he and his fellow ‘Scumrat” Qi’ra (Emilia Clarke) life a miserable existence with only dreams of having Han flying them both away from their lives one day the only thing to keep them going. When a vial of the sought-after hyperfuel coaxium falls into their hands, they make a break for it. But only Han is able to make it out of Corellia, leaving behind Qi’ra and a promise to return to break her out.

Years later, after serving in the Imperial military, Han falls in with a group of thieves led by Tobias Beckett (Woody Harrelson). When a theft of a train car full of coaxium by the group goes bad, Beckett must negotiate with gangster Dryden Vos (Paul Bettany) for a second chance. Vos grants them one, but sends his assistant with them to make sure they don’t screw up again, an assistant that just happens to be Han’s long-lost love Qi’ra.

Solo is a caper film, and a good one at that. It’s a great film that succeeds in spite of having to pay service to the Star Wars mythos. It’s a fun romp that at times reminds you of what you loved about the original trilogy.

I guess I should qualify that statement by saying your mileage may vary depending on what you think of Ehrenreich’s performance. This aspect was a cause for concern for me going into the film. The ads didn’t make it look like Ehrenreich had the same gruff but lovable charm that Harrison Ford had in the role. If you feel the same way, just realize that Ehrenreich isn’t playing the Harrison Ford version of Han Solo. He’s playing a younger version of Han Solo, before he experienced all the heartbreak and backstabbing in his life. And while Ehrenreich doesn’t really sound like Ford, he has copied many of his mannerisms and line phrasings. I didn’t have a hard time believing I was watching a young Han Solo up on that screen.

Ehrenreich is just one of the number of stellar performances in the film. Donald Glover steals the show with his portrayal of Lando Calrissian. Every so often, Glover delivers a line that sounds just like Billy Dee Williams. But he excels in playing Lando as a character whose reputation is only out matched by his ego. Neither are completely deserved but thanks to Glover’s performance we can’t help loving him anyway.

Harrelson is solid as always, as is Clarke. Thandie Newton is really good as Beckett’s wife and right hand woman and Bettany, who had to step in for Michael K. Williams in his role, does a great job playing the villainous Vos. Oozing with charm and menace, sometimes in the same scene, Bettany looks like he had fun playing the role. And the audience has fun right along with him.

There’s a lot of humor and heart in this film, which might not have been that big of a selling point of if the last several Star Wars films weren’t such downers. But there are a number of character-informed jokes in here that make watching the film an enjoyable experience. And the script by Jonathan and Lawrence Kasdan offers the perfect balance of action, humor and whip-smart dialogue make the over two hour movie fly by. And I think Disney made a the right move by bringing in a director of Ron Howard’s caliber. His style is just at home in the epic scenes as it is in the quieter ones.

And if you are a Star Wars fan, there’s plenty here for you to enjoy. Granted, the film does sometimes dip into the unctuous habit the prequels did of going a little overboard with paying respect to the original trilogy. Yeah, I know Han Solo’s blaster is one of the most iconic weapons in science fiction. But we really didn’t need the camera to linger lovingly over it for 20 seconds when Han acquires it. But other than that, there’s enough throwaway lines, Easter Eggs, and cameos to make fans of the franchise happy.

If you were someone who wishes the new Star Wars films were more like the original trilogy, Solo: A Star Wars Story is probably as close as you are going to get. It is a breezy mix of action, humor and heart. It’s a fun movie worth your time.

Live ALL IN THE FAMILY/THE JEFFERSONS Uneven But Entertaining Evening

The live event honoring two of producer Norman Lear’s most iconic television had some lows though they were eclipsed by the highs. [click for more]

HISTORY OF THE COMIC BOOK FILM: Superman Vs. Development Hell

In a multi-part series, Comic Book Film Editor William Gatevackes will be tracing the history of comic book movies from the earliest days of the film serials to today’s big blockbusters and beyond. Along with [click for more]

New Releases include Teenage Mutant Ninja Turtles: Out of the Shadows, Me Before You, and Popstar: Never Stop Stopping. [click for more]