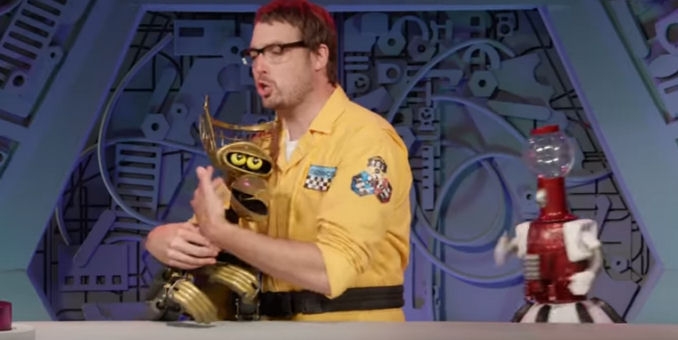 Mystery Science theater 300 and Thanksgiving have a fine tradition, going all the way to the show’s very first airing as a local produced TV series on Minneapolis’s KTMA. Of course, the Turkey Day marathons from the series’ run on Comedy Central are the stuff(ing) of legend, a tradition that was revived more recently thanks to online streaming.

And now, in a new twist on a holiday favorite, because there’s no tradition like a new tradition, Netflix is dropping the entire season of the series on Thanksgiving.

The newly released trailer for the new season, teases some a new torture that the Mads have cooked up for poor Jonah and the bots – something called The Gauntlet. Apparently, rather than being just subjected to a bad movie every now and then, they will be forced to sit through six cinematic stinkers in a row. (I think it is fair to say that there is a little bit of a tweaking of Netflix’s nose and the concept of binge watching here.)

Interestingly, I think this is the first time that the full season’s slate of movies has been revealed before airing. If you didn’t catch them, they are Pacific Rim knock off Atlantic Rim, Lords Of The Deep, The Day Time Ended, Killer Fish, infamous ET ripoff Mac And Me and the Miles O’Keefe-starring 1980s fantasy flick Ator, The Fighting Eagle. And yes, Ator is actually the film that the classic season 3 episode Cave Dwellers (“I think your cape is FABuulooooous!”) is a sequel to.

Get ready for more cheesy movies and hilarious riffing! [click for more]

Isn’t it nice to see some traditions that are worth keeping up? [click for more]

Want to found out who is and isn’t returning, who the new host may be and more? [click for more]