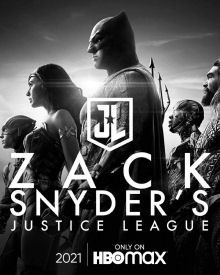 With eight months of post-production, director Zack Snyder had to drop out of his role on the superhero team-up film Justice League due to a family tragedy. Warner Brothers hired Joss Whedon to oversee reshoots and the completion of the film. The end result, released in 2017, was certainly nothing that pleased audiences or critics. Snyder’s fan base quickly began a vocal campaign to get the director back to fully realize his original version. Fast forward nearly five years to a time where Warner Brothers has a streaming service that needs content and so they decide to heed the call for Snyder to be allowed to return and restore the film to his intended vision. After spending an additional $70 million on the project – on top of the reported $300 million spent on the first iteration – we now have the four hour monstrosity known as Zack Snyder’s Justice League.

And while the results are a film a bit better than what we had before, Justice League is still not by any measure a good film.

If you have seen the theatrical Justice League, than you already know the story in broad strokes. In the wake Superman’s death as scene in Superman V Batman, Bruce Wayne, aka Batman, is struggling to put together a team of superheroes in to be ready for an alien invasion is senses is coming. Wonder Woman is on board, as is newcomer hero Barry Allen, aka the Flash, but Vic Stone, aka Cyborg, and Arthur Curry, aka Aquaman, are not interested. IN good time, that alien invasion arrives in the form of Steppenwolf, accompanied by an army of winged soldiers called parademons. Steppenwolf is looking for three MacGuffin Boxes, er, Mother Boxes, alien devices that when brought together can destroy all life on the planet and which were left behind after the last attempted invasion of Earth, led by Steppenwolf’s master Darkseid, ended in a disastrous rout and retreat. After the heroes have a run-in with Steppenwolf, they decide they need some more firepower on their side, so they hatch a plan to revive the deceased Superman using the one remaining Mother Box not captured by Steppenwolf.

So what does one get for a movie that is double in length? In terms of story, not much extra, outside of an overlong ending that puts similar criticisms leveled at The Lord Of The Rings: The Return Of The King to shame. But there is no denying the authorial stamp on this version. 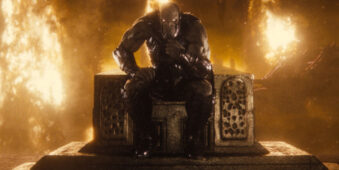 Much of Justice League plays as a greatest hits of Snyder’s worst impulses as a director. It’s the most Zack Snyderiest thing that has ever Zack Snydered. He continues to lean heavily on the crutch of slow motion imagery. When accompanied by sad music it is a stand in for actual emotional heft. When it is accompanied by bombastic music it is telling us we should be in awe of these god-like beings. But Snyder uses it so much that when he does find moments were it is effective, such as when some of the heroes shift into superspeed to fight the bad guys, we’re already too numb to the effect.

The pacing of the film – especially through a first act that seems to take up the film’s a bit more than half of the run time here – is at best lugubrious, at worst virtually none existent. Unrelated scene after unrelated scene is trotted out one after another with little effort to connect them visually or thematically. There is a lot of table-setting Snyder is doing here and he is making sure he is getting every utensil, plate and glass out for use. Unfortunately, the meal of the movie itself is rather poor and not deserving of all such finery. Setup after setup, and very little of it goes into accelerating the narrative at all. By the time that the film’s third act roles around there is no sense of urgency, stakes or tension to be found.

As mentioned, the film’s epilogue may tie up a few loose ends, but it also delivers one of the biggest pieces of fan service in the piece. This seven minute segment does nothing for the film at hand, but instead sets up a sequel that, given the nature of the how this production was realized, will most likely never come about. It is a segment that could have easily been cut – especially since some of it was shot after Snyder’s return to the project.

Cinematically, the film is still very much apiece with Snyder’s previous two DC Comics-based superhero epics. The color pallet is as muted as we have seen before. Despite Snyder striving for a lighter tone in terms of character interaction, the cinematography remains as washed out as ever. Snyder has shot the film in a square-ish aspect ration, professing that his preferred method of presentation for the film is in IMAX Theaters. (Never mind the fact that his cinematographer has claimed otherwise and every single published storyboard from the production points to the film originally being shot in a more standard widescreen format.) Unfortunately, the result makes the visuals feel cramped and any sense of epic scope he may be intending for his story is visually lost. What may work on an Imax screen does not work in a standard film screen aspect ratio. 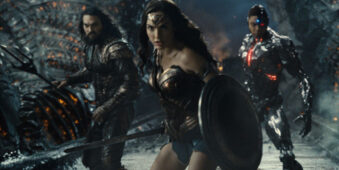 But all is not a loss with this new version. The characters of Barry Allen, aka the Flash and Victor Stone, aka Cyborg, both benefit from the expanded material. Much of Cyborg’s backstory is filled in here and the character gets a strong character arc in terms of his relationship with his father and his growth as a hero. These are the two elements emphasized in the Flash’s arc as well, but to a lesser extent. As noted above, Snyder is going for a slightly lighter tone with humor coming from the interaction between the heroes clashing personalities. Also, Bruce Wayne’s demeanor is not as dour as seen previously and he seems to be actually loosening up a bit from the grim, gritty and emotionally closed off version we saw in Batman V Superman and has found the ability to have faith in others. If anything, it all helps to make the the film’s overlong run time just a bit less interminable.

In the long run though, Zack Snyder’s Justice League will perhaps best serve as an academic piece. Comparing sequences from the two versions can be an interesting way for film students to learn about tone, pacing, editing and overall scene construction. But beyond that, this one is strictly for the Snyder devotees.

Matt Damon As AQUAMAN: The Rumor That Will Not Die

What did FBOL’s Comic Book Editor think of JUSTICE LEAGUE? Take a look inside. [click for more]

Amber Heard In Talks For AQUAMAN

The actress is up for the lead role in the DC Comics Cinematic Universe film. [click for more]