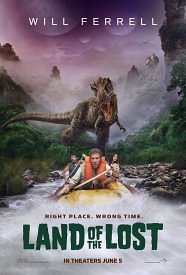 There’s a right way and a wrong way to adapt a television show to the big screen. This summer’s movie season provides us with good examples of both. Last month’s Star Trek serves as an example of how the right creative decisions to make a very good film. Land Of The Lost shows us that the result of making virtually every wrong decision will result in a very bad movie.

Will Farrell stars as Rick Marshall, a maverick scientist whose theories about time travel and alternate dimensions as a a means of solving the energy crisis have turned him into a laughingstock of the scientific community. Instead of having two children who accidentally journey with him to a mysterious land overrun with dinosaurs and other strange beings, he is accompanied on his interdimensional trip by Holly, a research assistant who actually believes Marshall’s theories and Will, a redneck river guide.

While it is a general rule of thumb to review the movie that you saw rather than the one you wished you saw, it is hard not to think that this adaptation went in the wrong direction from the start. While the original 1970s Saturday morning television series is probably best remembered for its low-budget chintziness, it had some strong and interesting ideas that made up for its dearth of production value. But rather than capitalize on the wealth of material inheritant in the original’s premise and create a family-oriented adventure film, the producers of this new version have instead chosen to go a different route, turning it into a comedy.

Not that there is anything inheriantly wrong with doing a comedic take on any material, it is just that it in this case it is just an excuse to allow Will Farrell’s increasingly annoying man-child character to run amuck. It wouldn’t be a bad thing if it weren’t for the fact that every comedy piece falls flat. The occassional action set-pieces fall equally flat, often ending abruptly on a joke before jerkingly cutting to another scene.

It is a sad state of affairs when the only thing that you can recommend about a film is its production design. The world that Marshall and company find themselves in is a crazy-quilt land where an arid, sandy desert butts up against a steamy rainforest boardered by barren rocky mountains all within a short walk of each other. Crumbling temples house strange crystal pylons that are doorways to extra-dimensional spaces. Everything from abandoned motels to wrecked oceanliners to ice cream trucks, all tossed through holes in space and time, dot the landscape. It is a rich and imaginative world that offers a multitude of story possibilities. Unfortunately, none of those possibilities are explored and any chance of an entertaining movie becomes just some more cosmic flotsam trapped in the Land of the Lost.

About Rich Drees 6775 Articles
A film fan since he first saw that Rebel Blockade Runner fleeing the massive Imperial Star Destroyer at the tender age of 8 and a veteran freelance journalist with twenty years experience writing about film and pop culture.

If giant robots pounding the motor oil out of each is your thing, then Tranformers 2: Revenge Of The Fallen should be right up your alley. Director Michael Bay certainly looks like he wants to [click for more]

Get Teased For Some SEX AND THE CITY

If you like your cinematic Manhattan a little less devastated than you’ll find in Cloverfield, than you might be looking forward towards to this spring’s Sex And The City, the feature film sequel to the [click for more]

Making the rounds today is a purported teaser poster for the upcoming X-Files 2 movie. I say purported as it comes from an anonymous source over at AintItCool and a few other sites are expressing [click for more]