In a multi-part series, Comic Book Film Editor William Gatevackes will be tracing the history of comic book movies from the earliest days of the film serials to today’s big blockbusters and beyond. Along with the history lesson, Bill will be covering some of the most prominent comic book films over the years and why they were so special. This time, we bring our four week “vacation” overseas to an end with the most notable comic film franchises Japan has to offer.

Before we start this final installment, a caveat—we won’t be covering every film franchise based on manga here. Due to the overwhelming popularity of the genre, and the prevalence of adapting manga into anime, there are a lot of series to cover if I wanted to cover them all. And since I want to end this History of the Comic Book film series before I die, choices needed to be made. I have decided to focus on live-action franchises that have had some effect on the West. This means no One Piece, no Yu-Gi-Oh!, no Naruto, no BLEACH, not even Dragon Ball and that one had a live action version to go along with its animated ones.

Our first entry is the Lone Wolf and Cub series. Created by writer Kazuo Koike and artist Goseki Kojima in 1970, the influential manga focuses on a disgraced 17th Century Japanese warrior by the name of Ogami Ittō who travels the land with his infant son, Ogami Daigorō, seeking to avenge his murdered wife and his lost honor. The 28-volume manga influenced American creators such as Frank Miller and Max Alan Collins, whose Road to Perdition was greatly influenced by the work (we’ll be talking about the Road to Perdition film in the future).

WARNING: The trailers will be in Japanese and not English. I thought seeing them will give you an idea of the look and the feel of the film but don’t expect to understand the dialogue (unless you speak Japanese). You are forewarned! No complaints!

If you have seen Quentin Tarantino’s Kill Bill series, you will get to understand his appreciation for Japanese films and culture. If you have read the Lady Snowblood manga or saw any of the films that it inspired, you will see how far Tarantino’s affection goes, as Kill Bill borrows numerous themes, characters, and even music from that particular work.

Lady Snowblood first appeared in the pages of Weekly Playboy magazine in 1972, written by Kazuo Koike and illustrated by Kazuo Kamimura. The manga told the story of Lady Snowblood, a woman born for only one thing—vengeance. Oyuki was born in prison to a woman convicted of killing her rapist. The rapist was part of a larger gang of thieves that killed her father and brother. The rest of the gang escaped justice, so Oyuki’s mother seduced a male prison guard to impregnate her, hoping to give birth to a boy who would eventually avenge the death of her family. The mother died giving birth to a girl, Oyuki, and ensured that she would be trained to exact the vengeance she could never have. Once Oyuki came of age, she began working her way through the list of gang members her mother left for her, taking assassination jobs on the side until she was able to complete her mission. 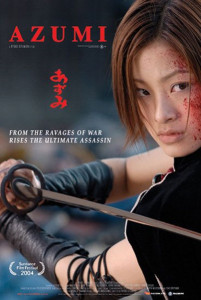 The manga was adapted in 1973 as the film, Lady Snowblood. The film followed the plot of the manga with a few major changes. The vengeance exacted by Lady Snowblood was more vicious, the side assassination jobs lost, and her final fate far more grim that the comic. The film was followed by a sequel in which Lady Snowblood becomes an assassin hired by the government to steal a document from an “enemy of the state.” The film was also reimagined in 2001 as The Princess Blade, which relocated the story to a post-apocalyptic future.

Another manga featuring a young female assassin that was adapted for the big screen was Azumi. Like Lady Snowblood, Azumi was trained from a young age to be a warrior. Unlike, Lady Snowblood, vengeance wasn’t the motivation, but political assassination is. She is called upon to kill warlords and other warriors that threaten to upset the balance of power in Feudal Japan.

The manga was adapted to the screen in 2003 with Azumi, which received a limited U.S. release in 2006. The film was a loose adaptation, but still retained many of the darker elements of the manga (including the final part of her training where she had to kill her best friend in class in combat to “pass”). It was followed by Azumi 2 in 2005.

The final franchise we are going to talk about this week is Death Note. The manga, which was created by writer Tsugumi Ohba and artist Takeshi Obata, and ran in Shonen Jump from 2003 to 2006, focuses on a young man who comes across a supernatural notebook that can kill people if their names were written in it while the owner was thinking about what the victim looked like.

The manga inspired three films, Death Note (May 2006), its sequel Death Note: The Last Name (November 2006) and a spin-off L: Change the World (2008). Shane Black has been tapped as the director of an American version of the story.

HISTORY OF THE COMIC BOOK FILM: The Rock-a-who!?!

Dave Stevens’ The Rocketeer comic book was a love letter of sorts to Hollywood’s Golden Age, and Hollywood did right by it bringing the comic to the screen. [click for more]

Oscar Nominations: Who Will Make The Cut

It’s that time of year again. This Tuesday, the Academy of Motion Picture Arts and Sciences will announce the nominees for the 82nd Annual Academy Awards. Every year there are snubs and surprises, thrills and [click for more]

Writer/director Quentin Tarantino has always worn his influences on his sleeve or in this case, placed them into the mouth of one of his characters to create one of PULP FICTION’s most iconic scenes. [click for more]