While we’re waiting for the announcement of who has been cast as new characters in the upcoming Star Wars: Episode VII, here’s word that another actor form the classic original Star Wars trilogy will be returning. The Hollywood Reporter is stating that their sources have told them that Peter Mayhew is set to reprise his role of Chewbacca the Wookie when the production gets underway next month.

Unfortunately for fans, Mayhew’s return signals that it appears as if the new Star Wars films will be ignoring at least some of the Expanded Universe of Star Wars novels and comics that had grown over the last twenty years. Mayhew’s character was killed off in the novel Vector Prime, set some 20 years after the chronologically last film in the series Return Of The Jedi. However, Disney studio head Alan Horn has stated that the new film will take place some 35 years after Jedi, suggesting that the events of that novel, and the multi-volume New Jedi Order novel storyline which it launched, is now no longer canon.

Unofficially, we’re expecting Mark Hamill, Harrison Ford and Carrie Fisher to reprise their roles of Luke Skywalker, Han Solo and Princess Leia from the classic original Star Wars trilogy. It also seems fairly certain that Anthony Daniels will be back as fussy protocol droid C-3PO. Maybe less certain is the return of Billy Dee Williams as the roguish Lando Calrissian, if only because his own statements that he would be returning were made before the film’s screenplay underwent extensive rewriting at the hands of Abrams and Lawrence Kasdan. 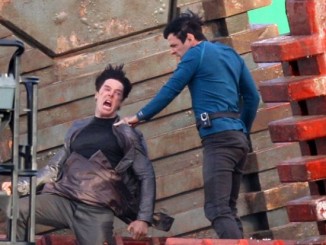 Good. It’s been so far up its own ass for so long it needs a fresh start.

Unless he’s back in a flashback. Seeing Mayhew at cons and see how difficult it is for him to even walk, I can’t see him having that big of a part.

He’s eventually crushed when a moon collides with a planet, so, how much moving will he need to do?

I know this is heresy to the purists, but frankly, I couldn’t care less what happened to a character in a novel or comic book even if it is considered canon. And I should think the producers would rather deal with an irate but relatively small part of Star Wars fandom rather than trying to keep track of three decades of post-Star Wars feature continuity.

See, the whole “it’s too much to keep track of 30 years of post-SW continuity” argument would hold more sway with me if Lucasfilm didn’t have people in their employ whose job it was to do just that, namely Leeland Chee, and a database, which they gave the snazzy name “The Holochron”, to keep all the auxiliary Star Wars stuff straight. So that job was already done for Abrams and company, so that excuse doesn’t hold water with me at least.

I love vast swaths of the Expanded Universe, but after being a die-hard Star Wars fan for over 3 decades, I’m more than happy to let new voices tell a new story, unfettered by the sometimes-questionable decisions from the campy superweapon-obsessed parts of the Bantam era and Del Rey’s increasingly silly grimdarkness. If the result is awful, let the result be awful on its own lack of merit. J.J. Abrams isn’t coming to your house to burn your books.

First off, these guys aren’t telling a new story. They are telling parts 7, 8 and 9 of a thirty year franchise. I doubt they’ll be changing anything from Episodes 1-6, even though they probably should. So then it becomes a case of being beholden to this, but not that. I have not read much, if any, of the Expanded Universe. So I wouldn’t know if something was included or contradicted. But Lucasfilms made millions upon millions of dollars off of their loyal fans who bought the novels and comics thinking they were the only sequel to Jedi that they’d… Read more »

As someone who’s consumed about 90% of the EU material, I thank you deeply for defending me from myself here. Even under the old guard, there have been numerous cases where different sources have contradicted. Unlike Doctor Who or Star Trek, which don’t bother to attempt to create an official canon from their respective sprawling expanded universes, Lucasfilm has a tiered system that basically states that everything that isn’t contradicted by the tier above it ‘happened’. This system has already undone a ton of stories: a giant chunk of the original Marvel comics most egregiously, a lot of Timothy Zahn’s… Read more »

No need to thank me, Jeff Stolarcyk. I’ll always be there to defend you, from yourself and from others, my friend. And I am well aware of the hierarchical system Lucasfilms put into place and that is has been used to undo a lot of stories already. And I am also aware that the films lie on the top of the totem pole and that the films have the power to change any other form of Star Wars media. But this has the potential of making all of C-canon into S-canon, which would be, and correct me if I’m wrong,… Read more »

Lucas’ people have been purposefully abstract about what specifically this will mean for the canonicity of the Expanded Universe. The assumption is that it will all get wiped out though at best, material that isn’t directly contradicted or not covered in the 30 year jump ahead will stand until contradicted, which leaves a bunch of the older material still intact. With the newer novels’ renewed focus on the Rebellion era and the core cast of the films, it seems like they’re already preparing the way for that status quo. I know more than a few people who are outraged by… Read more »

Dr. Who can barely keep track of it’s regular canon, let alone EU stuff. As far as Star Wars goes, the biggest mistake they made was letting fan fiction be called canon. All they are doing is limiting themselves to what they can or can’t do.