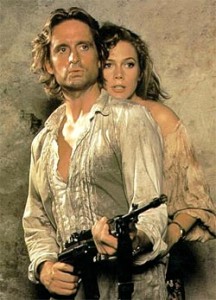 The original starred Kathleen Turner as a mousy romance novelist who journeys to Columbia to search for her missing sister and gets involved with Soldier of Fortune Michael Douglas. The film was a sleeper hit and helped launch the career of director Robert Zemeckis.

What made the original such a hit was the incredible chemistry shared by Douglas and Turner on screen. Their conflicting personalities and rapid fire bickering called to mind some of the great screwball comedies of the 1930s and 40s and was a precursor to a similar dynamic feature in the TV series Moonlighting, which would premier a year later.

Finding a new couple to recreate that chemistry will be a tricky, if not impossible, task for whomever signs on to direct and produce the film. Until they make an announcement about the cast, I’m just not that interested.

Garrett Hedlund To Take The Lead In TRON 2.0

Garrett Hedlund will be sucked into the cyberspace world within in a computer for Disney’s Tron 2.0. The Hollywood Reporter is stating that the Friday Night Lights star has been cast as the lead in [click for more]

Quentin Tarantino is no stranger to long movies. Pulp Fiction and Jackie Brown both clock in at just over two and a half hours each while his martial arts/revenge saga Kill Bill needed to be [click for more]

As if the idea of comedic remake of the 1957 sci-fi classic The Incredible Shrinking Man starring Eddie Murphy sounded bad enough, the project takes a turn for the even worse as the Hollywood Reporter [click for more]

Have the 80’s now become fodder for the remake machines already? What’s next? Breakfast Club, Ferris Bueller and all those teen angst movies for a new generation. Remaking Arthur and Romancing the Stone is very reinforcing the notion that there is little if any creative talent left in Hollywod and more and more movies will come as recycled versions of the orginals.