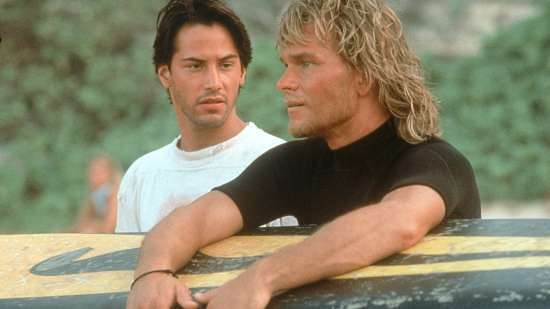 Kathryn Bigelow’s 1991 action film Point Break is in line for a remake. Alcon Entertainment, the folks who are bringing us Ridley Scott’s return to the world of Blade Runner, are setting up a remake of the keanu Reeves-Patrick Swayze starring film with Salt scripter Kurt Wimmer taking on the writing chores. The original film featuyred Reeves as a rookie FBI agent who infiltrates a group of bank robbers lead by Swayze who are also surfing enthusiasts.

You can read the complete press release below after the embedded trailer.

I have to say that I was never really much of a fan of the original film. While I thought that the foot chase was pretty inventive, the rest of the film left me flat. I was never much of a fan of Swayze’s acting and I was an early passenger on the “Keanu is wooden” train. Perhaps the casting on this version will be more engaging.

LOS ANGELES, CA., SEPTEMBER 12, 2011 – Financing and production company Alcon Entertainment is set to remake the 1991 action-thriller Point Break as a feature film for release by Warner Bros, its home studio, it was announced by Alcon co-founders and co-CEO’s Broderick Johnsonand Andrew Kosove. The Alcon principals secured rights to the project the week of the original film’s 20th anniversary from RGM Media, John McMurrick and Chris Taylor. Kosove and Johnson will produce along with Michael DeLuca, John Baldecchi, Chris Taylor and Kurt Wimmer who also wrote the screenplay (Salt, Law Abiding Citizen, upcoming Total Recall). RGM Media principal Devesh Chetty and investor John McMurrick, Chairman ofMarloss Entertainment, will serve as Executive Producers. The film is being fast tracked, with the filmmakers set to take theproject out to directors soon.

The new version is set in the world of international extreme sports,and like the original involves an undercover FBI agent infiltrating a criminal ring, but plot points beyond that have not been revealed by the filmmakers. State Johnson and Kosove: “Who doesn’t love the Kathryn Bigelow original and its pure heart-pounding action and thrills? Kurt’s take infuses the story and characters with new twists and settings.” Adds DeLuca “Point Break wasn’t just a film, it was a Zen meditation on testosterone fueled action and manhood in the late 20th centuryand we hope to create the same for the young 21st!” In addition to the feature rights, Alcon has also secured television and gaming rights to Point Break. The Bigelow original, starring Keanu Reeves, Patrick Swayze and GaryBusey, was produced by Largo Entertainment and released by Fox.

Schedule conflicts and creative differences are behind his withdrawal. [click for more]

The production company buys Valiant to help speed along the company’s character’s transfer to film. [click for more]

An ex-Warners Brothers employee writes a letter to their former boss calling him out on their many, many mistakes. Is it fair? [click for more]